First African-American photographer to shoot a cover for Vogue.

For the first time in 125 years if the fashion brand Vogue. An African american by the name of Tyler Mitchell shoots the cover of vogue for them.

Photographer Style Mitchell the first African-American to shoot the cover of Vogue.

Mitchell, who gained worldwide notoriety for becoming the first African American photographer to shoot a cover for the famous fashion publication in its 125 year history, announced the exciting news on Twitter on Tuesday.

The portrait which appeared in Vogue’s September issue, is titled “See Your Halo” and was taken in the English countryside of London.

“For so long, black people have been considered things,” Mitchell told Vogue. “We’ve been thingified physically, sexually, emotionally. With my work I’m cooking to revitalize and elevate the black body.”

It’s safe to say that it’s beautiful as Africans are now being more and more recognized in the fashion industry. 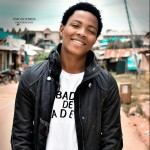 A Model who desires to create impact and value in the life of models, and fashion lovers worldwide.
Founder and C.E.O of EOA MODELING ACADEMY
Fashion blogger
Web designer
Creative personnel born with the gift of creativity.

Piggy Vest. Earn free N1000 for signing up to start your savings and investment journey. Click on the image below Now